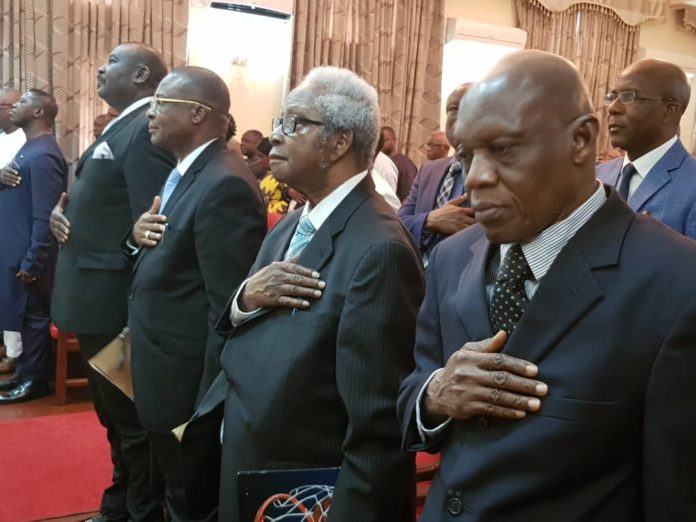 The much talked about three Commissions of Inquiry commenced formal sittings at the former Special court building in Freetown, on Monday 4th February 2019. The Parliament of Sierra Leone approved the holding of the Inquiry to look into the stewardship of individuals who served in the past All Peoples Congress (APC) led government from 2007 early 2018.

The three Judges (two foreign and one local) appointed by the government of His Excellency the President, Julius Maada Bio, have more than a century of experience shared amongst them and are highly respected personalities.
For the next six months, they will be sifting through documents and other evidences to know what transpired amongst officials in Ministries, Departments and Agencies (MDAs), in the execution of their official responsibilities.

Already the now opposition APC members are raising concerns on issues bordering on evidences and are threatening not to cooperate, if those concerns were not addressed.
However, it would be counter- productive on officials of the past regime to attempt snubbing the Inquiry should they be summoned, as there are enforcement measures in place, to institute compliance.
This therefore brings us to the need for the three Commissioners to be very prudent in what they do over the next 6 months.
That they are all Africans, obviously gives them deeper insight into the general attitude of the typical African when it comes to protecting interests due to relational or socio-political lineages. This the African can do by whipping up varied sentiments to safeguard age-old traditional, political and socio-economic interests.

Already the court of public opinion is inundated with intriguing allegations, here and there even before the Commissions started work, something the three Learned Judges must not lose sight of.
Hon. Justices Biobele Georgewill, William Annan Atuguba and John Bankiole Thompson must not allow themselves to be influenced by opinions or claims posted on social media or articles written under the guise of Concerned Citizen, which could be baseless and malicious attempts to unlawfully implicate persons because of reasons listed above or else at the end of the day, posterity will not treat them kindly for wrongfully implicating people of corruption.

The three men must instead look at convincing elements surrounding a particular matter and use their legal experience to arrive at a judicious conclusion, rather than on hearsay. This is of great importance as the recommendations they as Commissioners would compile and present to the government, would have far reaching implications in the lives of individuals named, and society as a whole.
Some years ago, a contracted British Judge sitting over a Freetown High Court corruption matter involving an indicted civil servant, before his ruling, drove all the way to Kenema in Eastern Sierra Leone to see whether claims against the accused, of him not buying the office furniture were true or not. He found the furniture intact and in good order, despite the litany of demeaning allegations levied against the poor fellow. Upon his return to Freetown, he promptly set the accused free. Pure Class!

Recounting that scenario is necessary; as we expect our Commissioners to carry out their work diligently, and forward their findings to the government which would in turn decide what best to do, in the interest of the general citizenry.

President Bio is keen to recover stolen money for use in the development of the country, a move that has been well received by the people and the International Community.

Well meaning Sierra Leoneans are hopeful that the Commissions of Inquiry would help serve as deterrent against the reckless and brazen abuse of office by public officials to acquire ill-gotten wealth. But again, the fairer the process, the more credence it would get.