Africa JOINT STATEMENT ON THE VISIT OF THE GUINEAN DELEGATION TO SIERRA LEONE... 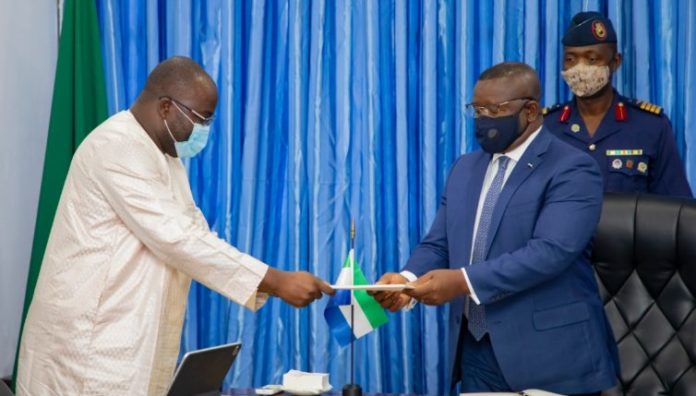 Following the visit of a high-powered delegation from Sierra Leone to Guinea from 28th-29th January 2021, the Minister of Foreign Affairs and Guineans Abroad of the Republic of Guinea, H.E. Dr. Ibrahim Khalil Kabba and a delegation comprising high-level officials of the Government of Guinea undertook a two-day working visit to Sierra Leone from 8th-9th February, 2021.

The Republic of Sierra Leone and the Republic of Guinea indeed share a profound relationship defined by goodwill, camaraderie, and friendship in the spirit of our common aspirations as sister countries, sharing a common border, as well as similar social and cultural values and family ties.

Whilst in Freetown, the delegation was received in audience by His Excellency President Rtd. Brig. Dr. Julius Maada Bio.

Both visits are therefore a consequence of the sustained efforts of both countries to support the consolidation of cross-border activities, security and information sharing between the nodal points for Sierra Leone and Guinea.

The Minister of Foreign Affairs and International Cooperation of the Republic of Sierra Leone and the Minister of Foreign Affairs & Guineans Abroad of the Republic of Guinea reiterated the resolve of H.E. President Julius Maada Bio and H.E. Prof. Alpha Conde to consolidate the peaceful co-existence and fraternal relations existing between the two countries.

The two Ministers also expressed satisfaction with measures so far taken by the relevant security sectors in Sierra Leone in ensuring collaboration with their counterparts on the Guinean side on matters relating to border and customs control.

The visiting delegation particularly commended the efforts of the Government of Sierra Leone in guaranteeing the commitment of its security sector to undertake effective as well as systematic operations at the common border points between Sierra Leone and Guinea.

The Ministers of both Guinea and Sierra Leone reaffirmed the commitment of the two Governments to continue dialogue on all matters relating to security and customs at all border points and emphasized the need for the consistent process of sharing of information on both sides.

The two sides also agreed to reconvene the Joint Technical Committee on Yenga which is expected to meet in Nongowa on a suitable date, as well as undertake joint or parallel patrols along the common border areas.

Both sides recalled the need for stronger partnerships in the economic, technical, political, security, intelligence, and customs fields, and reaffirmed the importance of deepening the existing bilateral relations through the implementation of three (3) framework agreements in Security Cooperation and Information Sharing, Customs Matters as well as a Joint Commission for Cooperation covering broad areas relevant to both countries.

The two sides expressed confidence that the Sierra Leone-Guinea relations will continue to grow from strength to strength and renewed their pledge to collaborate fully in ensuring the timely opening of the border.In this pleasing confidence, H.E. President Julius Maada Bio has accepted the invitation extended to him by his Brother and Colleague, H.E Prof. Alpha Conde to visit the Republic of Guinea at the earliest possible opportunity.