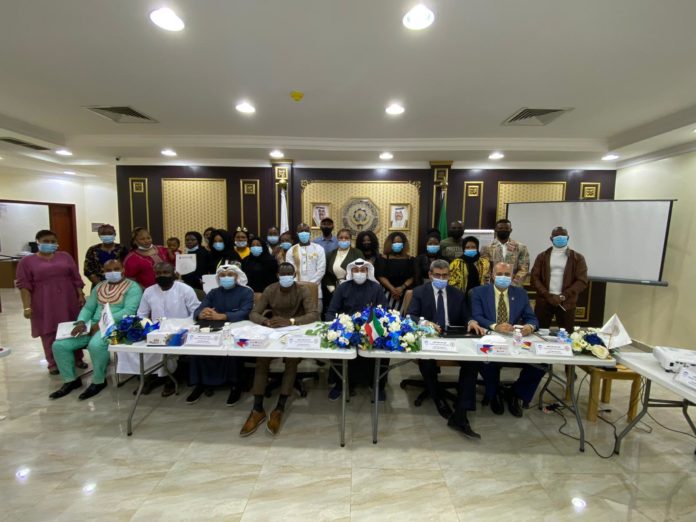 As part of its mandate to address legal issues affecting migrant workers, the Kuwait Trade Union Federation, in association with Solidarity Centre, has organized a Domestic Labour Law Seminar for Sierra Leoneans working as domestic workers in the State of Kuwait.

The purpose of the seminar was to provide orientation for workers against ill-treatment faced during work. The Domestic Labour Law (NO. 68, 2015) provides a remedy to the legislative gaps in connection with the regulation of domestic workers’ affairs.

Welcoming participants, the Secretary-General of Kuwait Trade Union Federation, Mohamed Al-Arada revealed that the Domestic Labour Law Seminar was the 13th training programme organised to give Sierra Leoneans a better understanding of the precepts of Domestic Labour Law and how to seek redress in case of any eventuality. He assured that the Kuwait Trade Union Federation was open to addressing domestic complaints as well as providing other assistance in the future.

Abdulrahman Al-Turki, the Program Coordinator of Solidarity Centre, extends thanks and appreciation to Kuwait Trade Union, Sierra Leone Embassy, the Union and Sierra Leonean for participating in the seminar. He emphasized that domestic workers in the State of Kuwait must know their rights in defence against injustices, adding further that the seminar would serve as a source of empowerment for them.

In his statement, the President of the Sierra Leone Union, Alpha Vangahun appreciated the Federation and Solidarity Centre for organising the seminar, which he considered as a useful guide in addressing the daily issues affecting Domestic Workers and for recognizing Sierra Leone Union as one of the major interest groups agitating for migrant workers in the State of Kuwait.

“Sierra Leoneans, especially females, are here today to learn the various provisions of the Domestic Labour Law because it concerns them. Though it was not easy to assemble them because of work and other perturbing issues relating to documentation, we realised that this seminar is pivotal in addressing most of the problems associated with their sponsors,” he stated.

Presenting the legal basis of the Domestic Labour Law, the Legal Consultant of the Kuwait and Middle East Financial Investment Company, Khalid Al-Shurman informed Sierra Leoneans that the Domestic Labour Law was a powerful weapon with which workers must arm themselves with. Disclosing the many sections protecting domestic workers, he mentioned that problems facing domestic workers required close collaboration.

“The law is important because it grants enforceable rights to domestic workers, and these rights border on a weekly rest day, one-month paid annual leave, number of working hours (12) with an hour break, provided that continuous working hours for domestic working does not exceed five hours; and end-of-service benefit estimates at one month for each year. In addition to the above, sponsor should also provide adequate housing, food, clothing and treatment for domestic workers. It is not allowed for any recruiting agency to collect money from domestic workers for the purpose of recruitment; the law sees it as extortion which is punishable,” he highlighted during the presentation.

In his closing remarks, he advised participants to always have a copy of their contract as this had prevented many the opportunity of lawfully seeking redress. Depending on the severity of the issue, he admonished them to always use the Embassy and the recruiting agency as official channels for complaints instead of absconding.