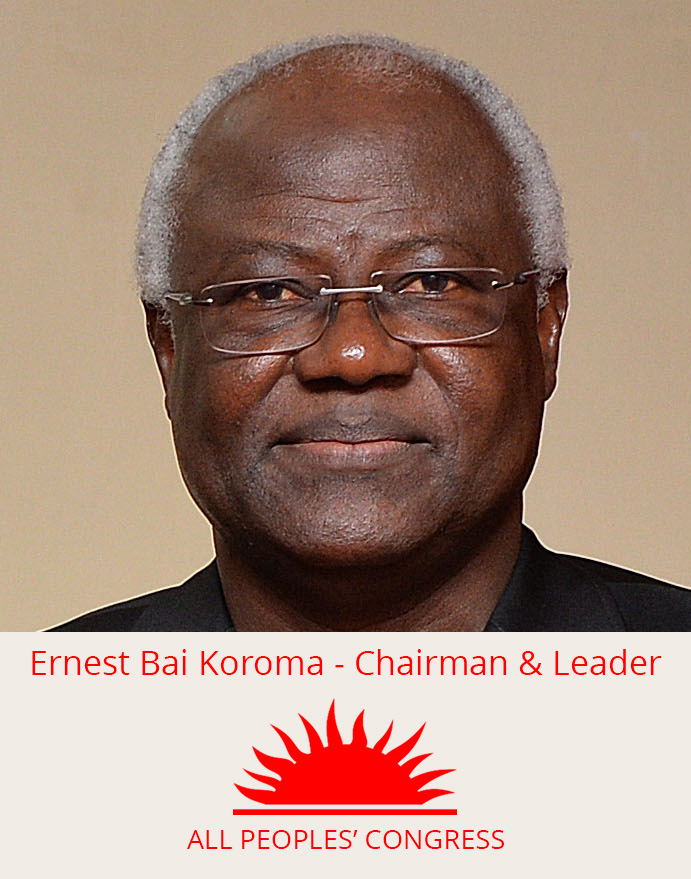 Download: THE MENACES OF NOT PROSECUTING ERNEST BAI KOROMA

Julius Made Bio is wary of a legal reckoning against his predecessor, but to let Ernest Bai Koroma go would be to sanction future corruption in Sierra Leone. As he gears up in his more than three years as President of Sierra Leone, one of the biggest dilemmas confronting Julius Maada Bio is what to do with the former Commander ln Chief. Ernest Bai Koroma refusal to leave his illegal position as active Chairman and ruler of the All People’s Congress and his fomenting of a farcical coup against right-minded people in the All People’s Congress are just his latest crimes against Sierra Leone democracy.

As president, Ernest Bai Koroma cannot be charged with any crimes. But after the 2018 General Elections, when Bio assumed the presidency, Ernest Bai Koroma’s protected status ended and he’s no less than an ordinary citizen. As such, Ernest Bai Koroma will be vulnerable to criminal prosecution. Already, there is an array of offences that he can plausibly be charged with. Koroma’s actions demonstrated that he used the office of the presidency for corrupt ends. The signing of the rogue Income Electrics contract, the unconstitutional ways of using state funds, and Koroma’s own words on many occasions, documented clear obstruction of justice. Koroma’s badly negotiated mining contracts with Frank Timis who was very closed to him, his direct interference with the judiciary and other democratic institutions to buy the silence of these institutions and his conflict of interest to make money for himself and the rest of his family members by awarding the unmerited contract to them at the expense of the general public. As a private citizen, Koroma can be charged for his own role in these matters.

Beyond these cases, there are numerous acts Ernest Bai Koroma committed as president, such as his business deals with the mining burster Frank Timis, his contract with Sierra Rutile that haven’t been sufficiently investigated because Ernest Bai Koroma was able to stonewall Parliamentary oversight. Koroma’s ability to fend off legislative scrutiny, Koroma’s money laundering allegations and his well-inflated infrastructure contracts across the country also ended with his presidency and one can expect an avalanche of revelations about wrongdoing.

But will the Sierra Leone People’s Party Democrats have the nerve to follow through with investigating Ernest Bai Koroma? Will the current Bio administration set loose the Anti-Corruption Commission and the Department of Justice to target Ernest Bai Koroma wrongs? There’s reason to think this won’t happen. Rumours from West Africa former rulers cartel states the “cartel has privately told President Bio that he shouldn’t allow his presidency to be consumed by investigations of his predecessor, according to people familiar with the discussions, despite pressure from some patriotic Sierra Leone People’s Party members who want inquiries into former Ernest Bai Koroma, his policies and members of his administration.” The rumour added, “the former West Africa rulers cartel in association with certain rogue International None Governmental Organisations has raised concerns that investigations would further divide a country Bio is trying to unite and risk making every day of his presidency about Koroma.” At the moment, it appears Bio’s government mistake to grant travelling licences to Ernest Bai Koroma to leave the country as and when he pleases helped Ernest Bai Koroma to create serious political pressure behind the scene for a Bio Department of Justice to refrain from prosecuting him. As one states, “One of the reasons [Bio] has given aides is that he believes investigations would alienate the million Sierra Leoneans who voted for the All People’s Congress.”

Beyond that, there’s little reason to believe that legal punishment would do anything to blunt Ernest Bai Koroma as a political force. Ernest Bai Koroma is an established West African cartel political rogue, which means that his supporters see any clash between him and legal authorities as proof that he is shaking up the status quo. Sierra Leone People’s Party has often expressed amazement and exasperation that scandals that would destroy a normal politician have not tarnished Koroma’s appeal at all. But as a strong member of the West Africa rogue political cartel, he’s not expected to obey the rules of the game. In fact, evidence that he cuts corners is favourably reinterpreted as defiance. Not pro-West Africa rogue system politicians like John Dramani Mahama and Gbagbo are much more likely to be held accountable by their successors if accused of being corrupt.

Years of experience continue to teach us that West Africa rogue politicians have sometimes gotten away with lurid corruption. Consider the fabled careers of Lansana Conte, Olusegun Obansanjo, Blaise Campaore, Gnassingbe Eyadema etc. If Ernest Bai Koroma is not convicted of crimes, he’s likely to follow the path of these West African rogue system politicians. As it stands, it appears Bio’s government legal prosecution will do nothing to fight the popularity of Ernest Bai Koroma. Indeed, given his close association with the West African rogue rulers cartel persona, it is likely to bind him closer to his followers. He’ll be seen as a martyr.
Having said that, not prosecuting Ernest Bai Koroma will also come with a cost. Sierra Leone is a nation of rogue politicians and elite impunity, as the history of recent decades demonstrates.

Ernest Bai Koroma inherited a sound economic footing from late President Ahmad Tejan Kabbah and spent ten years two weeks as President of Sierra Leone destroying the democratic values he inherited from his predecessor. But it now appears the intervention of the West African rogue rulers cartel will make Ernest Bai Koroma receive an expansive pardon from Julius Maada Bio. If this happens, Bio will cover all crimes Ernest Bai Koroma might have committed as president, even those yet undiscovered. It’s hard to interpret this pardon as affirming anything other than the idea that a Sierra Leonean president can never face legal liability, no matter what.

The rogue S.L. Mining contract and rogue Iluka Sierra rutile contract are about to close because their concession period is about to end, and they’ve made a huge amount of profit. The rogue African Minerals contract, the habits of using taxpayers monies with no respect to fiscal policy etc. should be seen as a successful cover-up, with underlings taking the fall for actions that were almost certainly sanctioned by Ernest Bai Koroma and his puppets. Subsequently, many of those underlings, notably his family members and stooges, are about to receive pardons that will free them from jail terms whilst the poor and vulnerable continue to languish in jail. A similar code of criminal silence, or omertà, could be seen in the Ernest Koroma administration, with most of his main relatives whilst the suffering majority served as the patsy in cases of conflict of interest contracts awarded to them. They are also subsequently going to receive a pardon.

BIO LED SLPP PAOPA REGIME HAVE TAKEN OFF THEIR MASKS