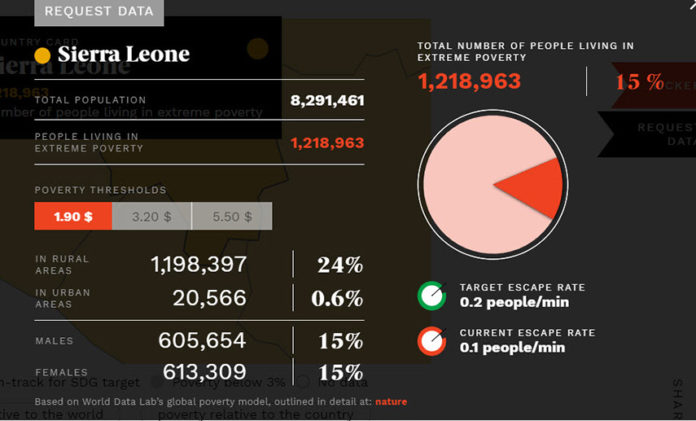 I’m fearful to make this article publicly known. Why? Because I’m a nationalist who talks out about the positive change in a society that’s well-wired with corruption cables by the selected few, but very powerful for the wrong reasons, and in talking out about how their actions continue to negatively impact our society, I may be endangering my career. But I do so anyway, out of love—love for my country, for the current and potential human resources of our country, for the majority in our society who they continue to glue in abject poverty. These are immeasurably more significant than my career, and I see the negative actions of the selected few in our social positions of trust continue to pose a clear and present danger to the standard of living of the majority. My choice to talk out has become easy, though, because I no longer see it as a choice. I need to talk out. Knowing what I know, I couldn’t live with myself otherwise. And in this, I’m not alone.

For the majority of our people irrespective of the huge amount of natural resources we own as a nation, the very tough times for them continue with no hope for today and the future. We have for too long, as people, rested on the assumption that by providing indisputable facts and great data with respect to President Bio’s government that we are providing enough, … and obviously that strategy has failed miserably.

But many nationals—many young people included—fear that standing up for what we know to be true or advocating for a specific action in response to odd actions from the selected few in a “New Direction” change that we find deeply disturbing according to our legal books, will make us look leaning or unprofessional. We’re fearing that if we express our concerns, we’ll lose our favours, funding or be labelled as anti-government or alarmist or be unnecessarily detained for exposing the rots of the selected few under President Bio’s government.

We, taxpayers, have a careful, understated culture; we don’t like calling attention to ourselves. We like better authorising our politicians to treat us like unwanted foreigners in their land. As a group be them, professionals or ordinary people, we prefer bootlicking and sycophancy to concrete developmental evidence politics that will move our country forward; we communicate our anger over the political system mainly within our ranks and we have made our politicians believe that we are only important to them during the election process. And when we have something scary to say, we employ the dry and precise language of stinky hypocrisy. Put all these factors together that’s why our people in social positions of trust that we keep on paying salaries, school their children with quality education in other countries abroad whilst the children of the majority are drowning with very poor education, plus the other unmerited benefits they give to themselves believe their loyalty is only to President Bio and that any attempt to question the illegalities within the Executive Arm of government is tantamount to undermining President Bio’s cabal of “New Direction” for the selected few.

What we are really acknowledging to our politicians is that, however, when taxpayers don’t speak out, we’re inadvertently sending a message that our social service deliveries aren’t urgent. If the beneficiaries- the taxpayers on the front lines, the people who know—are so calm, dispassionate, and quiet, how bad can it really be?

As a nation, we continue to experience awaiting anarchy with genuine fire boiling underground towards our coming general elections as tensions between the opposition parties and the incumbent SLPP are resurfacing again, but authorities are doing nothing positive to concretely address these tensions. These are signs of terrifying potential danger unfolding slowly, but deliberately. The truth is with politicians at each other’s throats and with the high rate of unemployed youth in the country, this is a recipe for potential instability in our country. Is this the new game plan by our politicians to create instability in our country?

But after I give a public talk on this thorny issue, without fail, someone in the audience will ask, “What can we do?” It’s an instinctive question, and it seems irresponsible to reply, “Figure it out yourself” or “That’s up to the policymakers.” I’ve spent more than a decade grappling with that very question. After all, I’m allowed to think about things other than. I’ve built au fait opinions as to what works for me as an individual and what seems sensible for society.

There are two ways taxpayers in Sierra Leone can speak out.

To begin with, is merely to communicate that ongoing selected few in social positions of trust driven changes of perfecting corruption to the Administrative system of governance or perfecting wrongs over right demand urgent action before things get much worse. This massage incorporates a value judgment, something you’ll almost never see in a formal political talk directly with our politicians, clergy and youth immediately when the politicians took over governance and decide to visit them; Sierra Leoneans prefer staying far away from feelings and value judgments.

A second way to speak out is to suggest solutions, which take us even further out of our present bootlicking, nepotism and sycophantic comfort zones.

When I propose solutions, I make it clear that I’m speaking as a citizen, not a political party member. But if the selected few in social positions of trust and their flunkeys who continue to oppress the people on all fronts expect a political party member to have no opinion about rotten public policy openly, they hold a false expectation. Better to consent that we do, and translate that good political party members must be patriotic and are capable of keeping those opinions openly from biasing results. Contributing worthwhile solutions is vital to meaningful communication. As Katharine Hayhoe points out, “acceptance of a problem is much higher when an engaging solution is offered openly”.

Our Members of Parliament are our law drafters and we expect them to use the laws of the land with observations of the recent past, they are to reconstruct the laws of the land with distant past with a sense to uphold possible human quality behaviours that can respectfully provide for all nationals to stop this awaiting resurgence of self-destruction of our nation we often call civil war and our Members of Parliament must ensure that we fold these into possible futures. As writers and activists, we’re the ones who stand face to face with the beast on a daily basis. If the future we’re heading toward looks scary, it’s up to us to sound the alarm that a change, of course, is needed. We’ve stayed the course too long, and now, frankly, the reality is alarming.

But our President and policymakers simply don’t speak our language, and this is why we need to know when to shed the mantle of patriotic authority and speak from the heart openly. We need to let our emotions shine through; we need to become storytellers. Relaying the nepotism, hypocrisy and bootlicking, as beautiful and convincing as it is to us, hasn’t worked. We have a responsibility to tell the whole story.

The real problem here for certain isn’t taxpayers being political—it’s the majority of our politicians being just plain wrong, they can’t lead, they have lost their patriotic sense of purpose by putting their personal interests ahead of national issues. Speaking openly about the massive corruption under this government, the high degree of injustice inflicted on the lives of the majority by these current politicians, the barbaric actions of the majority in the government to loot State resources and illegally amassed wealth and get away with it. Are all signs of clean failure with a sense to continuously deny the majority of our nationals social service deliveries and spread massive poverty in the lives of our people. To couple, this with huge taxes on all essential goods and the huge youth unemployment rate in the country is a clear indication that these politicians are more comfortable with the miserable standard of living of the majority. And make no mistake, these are all signs of poor leadership that are manifesting that President Bio and the majority of those he charged with social positions of trust have failed this nation completely.

For the sake of the suffering majority and their kids, I don’t feel that I can afford to wait for our policymakers. It’s a serious situation: You can get into more trouble these days in the Hands of The Almighty God by failing to tell the truth.